While to us as consumers, inflation is painful and the market reacts as such as well. Many times in the media we’ll see inflation in bold headlines and mentioned in articles that overview doom and gloom for the market and economy.

All the while, a level of inflation of around 2-3% is healthy for the economy and shows we are growing and heading in the right direction.

However, it is important to remember we have seen these times before. 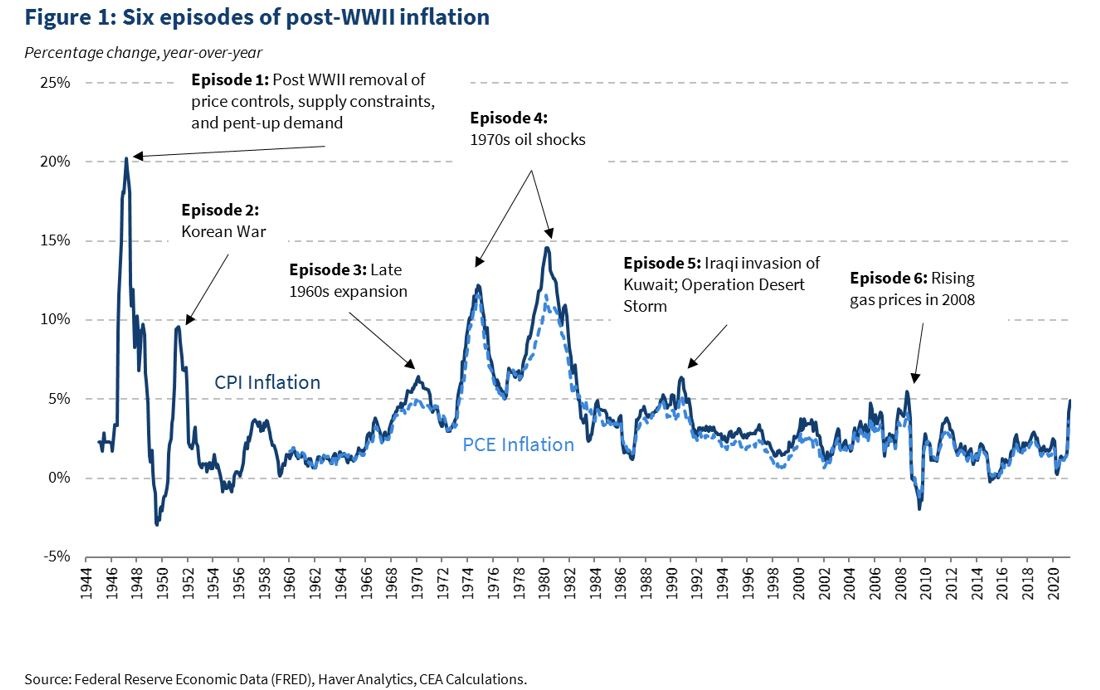 This chart is from the Federal Reserve Economic Data and I pulled it from The White House website. This chart covers the inflation that we have had every year since WWII in an easy to read graph. We’ll be using the CPI Inflation bar as that is the most commonly used gauge for inflation. I want to highlight three of the “episodes” we see above.

The inflation of this time period was driven by a few factors. Oil prices had quadrupled once and then doubled once during this time period, showing an immense amount of volatility in that sector. This was accompanied by economic growth that was weak and supply shocks to consumers. Add these all together and we have a period of time that inflation was very high consistently as we see with the numbers above.

The early 90’s were off the back of a great period in the 80’s of growth and prosperity. However, the beginning of the decade experienced an oil price shock as an aftermath of Iraq invading Kuwait. While this was not as bad as the previous oil shock in the 70’s and early 80’s it still had an impact on the US economy. This and other factors weakened our economic growth which led to higher unemployment and job loss to start the decade.

The most recent and memorable time of extreme volatility and uncertainty was this period in 2008. As what is known as the Financial Crisis rolled over the US. The housing bubble popped and there were historically high rates of defaults came through due to subprime mortgage loans. In essence, banks got too greedy with lending, people couldn’t afford what they were given by the banks, and it all collapsed in on itself. This led to a period of job loss, a recession, and higher inflation.

Now, let’s take a look at the S&P 500 performance after these years.

Inflation peaked in 1990, after that the S&P 500 went into one of the strongest runs in history.

Inflation peaked in 2008, once again followed by another incredible 10+ year run for the S&P 500.

Even though in the moment things can seem bad or worse than they are, just like they did in those times as well, long term we tend to be better off for it. There’s a number of reasons why we end up in a better spot. Many of them are tied to the fact that times like these give us a chance to reset and change some of the behavior that brought us here. Typically, those changes are followed by periods of great prosperity until we need to do so again.

All of this is a natural evolution and cycle in the market and while no one knows just yet when inflation will officially peak and uncertainty will subside, we can look back and see a clear picture as to what we can potentially expect on the other side of it.